A downloadable game for Windows

You are stuck in this lonely backwater galaxy with only your little ship and a hundred credits to spend. You need to trade your way to fortune, eventually buying the warp drives you need to leave. There is, however, a catch. The precious cargo you trade in is radioactive and won't last forever. If you wait too long to offload it for the best price, it will decay to nothing, leaving you with nothing to sell but a hole in your credit balance. Sometimes, it's better to sell at a loss than to sell nothing at all.

Along the way there are speed and cargo hold upgrades to help you bring in more and more profit.

Six months I worked on that rust bucket and what did I have to show for it? Dumped on a planet with little over $10000 credits of the $50000 the captain owes me. Teach me to trust a space ore runner. I am so done with this backwater galaxy. Now all I need to do is warp my butt out of here.
That's the theory, anyway. $10000 sure as hell wasn't going to get me a ship with $1000000+ warp drives. Hell, I'm lucky this F4X Sparrow 4th Gen Space Freighter even came with engines for the $9900 credits I paid for it.
But it does have six radiation sealed cargo holds capable of holding any precious radioactive ore, with room for further expansion. And with a few engine upgrades, she can run the whole galaxy. Now all I need to do is buy some ore and sell it before the radioactive ores decay to nothing. For a profit, of course. Rinse and repeat to riches.

Use the arrow keys to turn and move forward and backward.

The mouse cursor selects planets when you hover over them.

The spacebar is bound to Brake, causing your ship to stop instantly

The M key is bound to Map, showing you a planetary map of the surrounding galaxy.

The Tab key is bound to Ship, showing you the contents of your ship.

The Escape key is bound to Quit, letting you save and quit the game.

There are also on screen controls which perform the same functions.

I've always been ambitious in scope when it comes to these game jams, but this was the first one where, about half way through the week, I felt I'm not going to get this done. While I was happy with a few of the things I had done successfully up to that point (the save/load game feature was something I really wanted to tick off), I still had a lot of scope and no playable game to speak off. And with all the gameplay ideas in my head, I was struggling to think of how I could salvage even anything that could be turned in as a 'game'. I didn't plan originally to focus in on the radioactive decaying ores as the core gameplay idea, but a straightforward trading game just didn't seem that challenging (i.e. fun). I think what I've done 'works', though I'm sure with more time it could get tuned better.

Here are some of the ideas that didn't make the cut:

- Different types of ores (I was going to have radioactive ones that where worth lots but decayed. And organic ones that multiplied the longer you held on to them)

- Planet 'delivery' quests. Pick up a piece of cargo from one planet and deliver it to another

- Upgrades should take up cargo space

- More upgrades, including map upgrades so you could see planet names on the galaxy map

- Random comms messages when you 'speak' to planets

- Oh, and I probably would have come up with more melodies with some more time to put over the top of that 12 bar blues idea going on in the background.

- I make no checks to see where things are generated. I very much suspect you'll find the odd planet overlapping now and then

- I didn't get around to working in negative feedback in the UI. i.e. A bad boop when you can't do something.

- I'm not convinced I completely reset state & delete every instantiated game objects if you quit a game and start a new one in the same session.

All assets developed by me within the 8bits to Infinity game jam, except:
Fonts (Kenny Rocket & Kenny Mini) used are public domain fonts by kenney.nl, licensed under CC0 1.0 Universal

Spaceship and starfield parallax graphics repurposed & tweaked from a prev game jam of mine (Swansong).

hacked.design is the brainchild of Ben Wise.

So there's a bug when selling items at a planet market. It never reduces the item count in a hold when selling. Totally exploitable. Fix will be uploaded after the jam voting ends. 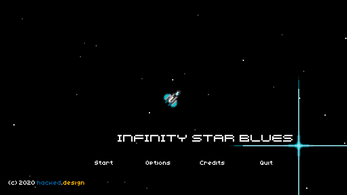 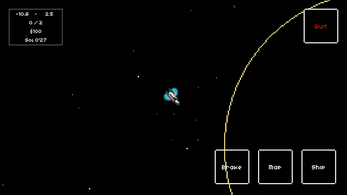 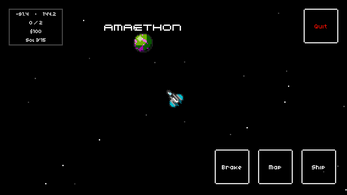 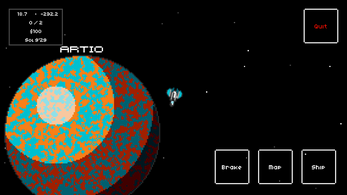